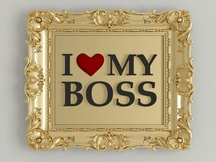 While this post isn’t directly tied to marketing effectiveness and best practices, I thought it was an interesting philosophy and approach worth sharing.

Recently a colleague and I were having a philosophical conversation about the current state of the job market, and he told me about a friend who was in search of a job after relocating to a new city due to his wife’s career move. His friend’s an older guy and was hesitant to start a new search in a world where wisdom and expansive experience are undervalued. So he decided to use a different tack, thinking, “what could it hurt?”

This guy’s an accomplished artist and designer, super creative and one of the smartest people my friend has ever met. But he didn’t have the energy to approach the job market in a traditional way — so when he thought about what he reallywanted, it boiled down to — “I want a great boss, who gets it and gets me, and leaves me alone to do my job, that’s all I really ask”.

His concept was then to campaign for “A Great Boss” instead of “A Great Job”.  And his story and positioning went something like this…

I am an experienced web designer, videographer and communications professional…blah blah blah.

If you are a great boss with these philosophies, skills and competencies, I am interested in talking to you.

Are you qualified to apply for this job?  Food for thought.