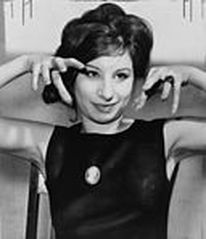 I have always known who Barbra Streisand is (of course), but I’ve never been a devoted fan or follower of her work. A few months ago, a friend took me to the symphony to hear a vocalist cover Streisand’s songs. Maybe it was due to the influence of a live performance and symphonic accompaniment, but I thought the songs were amazing, and noted that I hadn’t heard many of them (from her first albums and performances circa early 1960s).

After that I wanted to know more about Barbra’s early material, so I did a Google search and found articles, videos and audio clips which included performances from New York night clubs, and her first albums and TV guest spots. I also came across her TV specials, which I never knew about (including a concert for 135,000 people in New York’s Central Park in 1967). The girl was definitely gifted…and so unusual (in a good way).

Then I saw commentaries* and links to content that revealed some insight (although it may not all be true) into how her brand was built and launched in just a few years time. Since she was only 22 when she hit it big, I was intrigued with how her brand was developed given: 1) she was young and poor with no major connections in show business; 2) her music style was not the most popular of the early ‘60s or among her age group; and 3) at that time there was no American Idol, YouTube, social media, etc. to showcase her talents and get her noticed quickly.

As a marketer I found her journey in the early years quite fascinating. It seemed that her brand came together with an organic and optimal mix of talent, strategy and execution; deployed with precision by very smart people. She went from — a nobody that had: no vocal training; unconventional looks and style; and limited experience and resources — to winning Grammy, Emmy and Academy Awards her first times at bat (and before the age of 30).

So what can marketers learn from the initial launch of the ‘Barbra brand’?

To me it’s a lesson in old school, which can be helpful if/when one isn’t aware or forgets, that the adoption of basic marketing principles often makes a big difference in whether a brand takes hold. Using the Barbra brand analogy as an example, here’s what I mean:

1. Start with a vision and a clear picture of what you see as the outcome for your business.

2. Make sure that you have a great product and offer, and that you are unique and different.

3.  Build a great story around the uniqueness; invest in the talent and resources to do this well.

4. Hire great talent to distribute and sell the story.

5. Take baby steps to build momentum, i.e. to grow the brand and story over time.

6. Build a community of influencers who can help get the message out and validate your brand’s promise.

7. Continue nurturing and enhancing the product.

The point is: It can be valuable to revisit and think through brand-building principles such as the ones mentioned. The smart use of old-school essentials may help you break through the clutter to make your presence known and attract buyers. Barbra Streisand’s rise to fame is but one of many examples of how these disciplines can pay off.